Showing posts from April, 2015
Show all

The Post-WWII Boom... Not a Norm 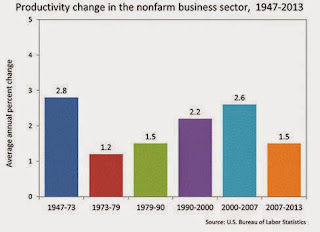 I've long argued that it was not unions or government spending that produced the great post-war boom in the United States and much of the Western World. In December 2014, Tim Worstall published a column on The Register ("El Reg") that agrees with my basic theory: we had to rebuild after the war, and the U.S. was fortunate enough to be the one nation not destroyed during the two World Wars.
Bring back big gov, right? If only the economics, STUPID, could tell us more Post-WWII growth rates? Paaah
http://www.theregister.co.uk/2014/12/21/bring_back_big_government/21 Dec 2014 at 09:00, Tim Worst You don't have to go all that far leftward these days to find someone brandishing economic growth statistics at you. Proving that growth was higher in the 1945-1973 period than it has been in our own more neoliberal age. Thus, of course, we should bring back the signal economic and political policies of those days so that we can speed up growth again. Big Unions, government control…
Post a Comment
Read more
More posts