Showing posts from March, 2016
Show all

In the One Percent? Probably not for long... 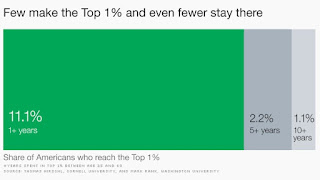 My wife and I have been in the top ten percent off and on for a few years. We've even made it, briefly, into the top five percent. And, like most people in those "upper-class" categories, we quickly fell back out of the top tier of households.  Why is that?  For one thing, high incomes tend to be temporary "blips" related to "good years" for some professions. The highest earners are not salaried workers with steady, predictable incomes. Instead, the highest earners are glorified freelancers: doctors, lawyers, consultants, and other specialists.  Some years are great for professionals. You might have an unusual number of surgeries if you're a doctor. Maybe you win a windfall case if you're a lawyer. A consultant lands one great contract. The money flows in for that year and you stash some away. Because, as the upper-middle knows, that one year is pretty rare.  Eleven percent, slightly more than one out of every ten adults in the United States,…
Post a Comment
Read more
More posts