The marginal and effective U.S. Tax rates mentioned in this 2011 post have been supported by research conducted by Thomas Piketty (Paris School of Economics), Emmanuel Saez (UC Berkeley and NBER), and Gabriel Zucman (UC Berkeley and NBER). These economic researchers are well-respected by progressives. Data are data, though we differ on interpretations. "Income" vs. "Wealth" presents much of the challenge, as wealth accumulates but is not taxed in the United States. Distributional National Accounts: Methods and Estimates for the United States published July 6, 2017, includes the following table:

As the table shows, the effective tax rate for the top 1 percent peaked at 45 percent of income in 1944-45. Unfortunately, the overall revenue intake of the United States kept growing and the burden has been falling most on the bottom 50 percent. Tax increases on the middle and lower classes reduce potential economic growth since these individuals spend more of their income.

This column is on the misunderstanding of higher federal tax rates, which are marginal and not effective rates. There is a theory, and one that seems to hold in European nations as well as in the United States, that the high-income taxpayers will pay no more than 50 percent of their income to taxes, in various forms. Higher than 50 percent, people find ways to avoid taxes.

There is a common misconception that high-income Americans are not paying much in taxes compared to what they used to. Proponents of this view often point to the 1950s, when the top federal income tax rate was 91 percent for most of the decade. However, despite these high marginal rates, the top 1 percent of taxpayers in the 1950s only paid about 42 percent of their income in taxes. As a result, the tax burden on high-income households today is only slightly lower than what these households faced in the 1950s.

There is a "myth" that the economy of the United States chugged along at least in part due to higher taxes on the wealthy in the past. First, this myth, like so many about creating prosperity, ignores that U.S. growth came after two world wars wiped out most of our competitors. Second, the implication is that "the rich" were actually paying 90 percent taxes at some point in history. That's never been the case.

The U.S. tax system uses an "Effective Marginal Tax Rate" model. The EMTR is applied on ranges of earned taxable income. Each taxpayer pays roughly the same amount on his or her income within these ranges. According to the IRS, the EMTR schedule for 2011 is:

An income of $150,000 a year? The Real Rate is 24 percent. And that's not the "real rate" as most of us would think of a "real" tax rate. Why is that? Because taxable income is not even close to what most people actual earn. Earned income and taxable income are two different things in government speak.

So, let's get more complicated. When there was a 94% top rate in 1944-45, there were so many deductions and exclusions that the taxable income was not comparable to someone's entire income. First, the top rate started at $200,000, which today is equal to $2,413,059.90 — so the maximum EMTR would apply only to incomes of $2.5 million. But, that's still taxable income, not earned income.

In 1944, you could deduct business meals, all business travel, all forms of interest payments, and much more. You could even deduct spousal travel expenses on a business trip! (Why travel alone?) Companies could also "loan" or "provide" almost anything to an employee, from an apartment to standard benefits. It was possible to shelter tens of thousands of dollars from taxable income. Three-martini lunches and expense accounts were important realities, skewing tax calculations.

As a result of deductions and exclusions, even the theoretical maximum Real Rate of taxation at 60% in 1944 overstates taxation dramatically. The reality? On earned income, the richest U.S. taxpayers paid close to 40 percent of their earned incomes in taxes in 1944. We simply didn't count much of the compensation as taxable income.

Allow me to introduce you to Hauser's Law. Published in 1993 by William Kurt Hauser, a San Francisco investment economist, Hauser's Law suggests, "No matter what the tax rates have been, in postwar America tax revenues have remained at about 19.5% of GDP." This theory was published in The Wall Street Journal, March 25, 1993. For a variety of reasons, we seem to balance tax collections within a narrow range.

Since 1945, U.S. federal tax receipts have been fairly constant in terms of Gross Domestic Product (GDP), with taxes ranging from 15 to 20 percent of GDP. The graph is as follows: 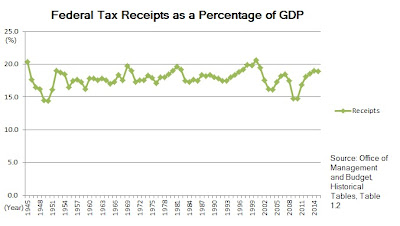 When people demand higher taxes on the rich, usually phrased as paying a "fair share," they are ignoring how our tax system has functioned historically. We could create more brackets, to tax the top 1% at a higher rate once again, but the net increase in tax revenues wouldn't be dramatic. Why not? Because government spending is near historical highs: we are spending at near-WWII levels. It would be nearly impossible to tax enough to pay the federal bills, and doing so would likely crush the economy.

So, how could we address income inequality if not through increasing taxes? That's really what people are asking when they demand fairness. The real complaint is the gap between rich and poor. I'll address that issue in an upcoming blog entry.
campaigns effective rates elections federal budget income taxes marginal rates memes myths social media taxes WWII

Popular posts from this blog

Call it 'Too Depressed to Blog'

By PoetCSW - November 24, 2017
Though the contemporary Republican Party has never been libertarian enough for me or many others focused on economic issues, we at least imagined the GOP would lead a President Trump, who came into office with no governing experience and a platform that was populist and nationalist. The GOP has failed to do much practical at all. If you, like me, at least hoped Trump would be contained by party orthodoxy, the year has been nothing but disappointment after disappointment. Civil Rights: Hard to think of anything the GOP or Pres. Trump has proposed with which I agree, from gender issues to voting rights, the GOP is allowing Trump to lead on these subjects — in the wrong direction. Gay marriage should never have been a national issue. Private matters are private, between consenting adults. The libertarians and social conservatives will always be in conflict on these issues. On voting rights, I am okay with a basic national ID standard, as is being implemented for the TSA via ne
Read more

Freedom From vs. Freedom To

By PoetCSW - August 18, 2012
Following a post on Krugman, probably because that is what he was reading, Nathan posted the following comment: In your description of yourself, you are a classical liberal defined as: "Classical liberalism embodies the original concept of liberalism: a faith in freedom to, not freedom from as a guiding principle." Yet the concept of 'freedom to,' which is positive liberty, is contained nowhere in the U.S. Constitution. The founding fathers of our country were, as far as the definition of classical liberal that I know, mostly classical liberals - hence where we get the term. Yet, the U.S. Constitution is only written in terms of negative liberty, or 'freedom from.' How do you reconcile what appears to be a modern interpretation of classical liberalism from what is most assuredly a different actual and historical definition of the term classical liberal? Check the definition with references from the Stanford Encyclopedia of Philosophy before answering
Read more